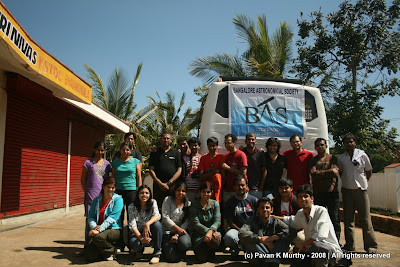 Finally, a star party and quite a big one at that! The Bangalore Astronomical Society kickstarted it's proceedings for the International Year of Astronomy on the most ideal note possible. With the participant count touching 30, it turned out to be nearly seventy two hours of pure fun and healthy astonomy, in the pitch dark Mag 6.5 skies that Coorg provided us.

The Star party itself began with a formal round of introductions at 6:30PM on Saturday evening, with enthusiasm and anticipation running high on both the first timers and the erudite amateurs alike. The observing equipment for the trip included Amar's 20X100 giant binoculars mounted on a custom parallelogram mount, Naveen's 6" f/8 Equatorial, Shashank's 8" f/6 Equatorial among st many other smaller binoculars, laser pointers and misc accessories.

The first leg of the session included pointing out prominent constellations to the beginners and this was duly done, with quick but detailed mythological sermons (and pointing) on Orion, Canis Major, Canis Minor, Lepus, Taurus, Auriga, Cassiopeia, Gemini and more. The audience and it's burning interest was aparrent in that most of them could familiarize with what was pointed out almost immideately. The skies, despite the venue being a guest house showed an extremely prominent winter Milky Way despite our poor dark adaptation at that time. All of the participants and passers-by (at the hotel, and quite a few of them too) could notice the contrasting tinge of white on the near black background and appreciate the splendor of the Milky way.

We then began a routine rondup of naked eye and binocular objects while Naveen and Shashank worked on setting up their Telescopes. Amongst the objects that excellent binocular or Naked eye views were M41 (Cluster in Canis Major), M42 (The Orion Nebula), M35 (The cluster in Gemini), H and Chi Persei (Double Cluster in Perseus), M31 (Andromeda Galaxy) amongst many others. The Andromeda galaxy especially provided quite a sight through the giant binoculars and as did H & Chi persei, the duo proving to be the crowd's favorite as usaul, while The Orion Nebula too managed to induce a lot of frenzied reactions. Earlier, Venus (a perfect half in phase) also provided an excellent view through Naveen's telescope. We however, proved to be a little late on Uranus (Just a few degrees west of Venus) which went into a translucent haze layer close to the horizon.

Beyond this point Naveen took over, to give a talk on the basics of Observational Astronomy, primarily focussing on Frequently used analogies and terms of the like of Hour angles, Equatorial Coordinates, Altitudes and Azimuths. The group also branched into two around this time with the telescopes (with Akarsh and Shashank at them respectively) pointing to various bright objects and each one of the people duly taking turns at the eyepiece. Most people (reluctantly) retired for dinner after this to be back in about half an hour.

The post-dinner session was specially marked with Amar pointing Comet Kushida to all of us. This not-so-faint fuzzy looked quite special right on the first sight and instantly became a hit with the many first timers who got to look at it too. We continue to be mesmerized by Amar's intuition of the night sky, who managed to find the comet sheerly by approximation of it's path from his previous observations. I (or KStars - the planetarium software that I used) did not help the cause by providing the wrong location. Comet Kushida provided spectacular views through Shashank's 8" f/6 whilst offering a more challenging to see perspective through binoculars. It was undoubtedly, my pick of the night, and I daresay this would apply to a few others too.

The time clocked 12AM by about this juncture, and there was no sign of stopping. While the regular lot of us are pretty used to each others nocturnal ways (in general), and staying up all through the night on star parties, It was very heartening to see even the first timers having no intentions of sleeping. The photography enthusiasts took to their cameras, tripods or tracking setups after and this too aroused further curiosity and interest amongst the participants. Naveen gave an astrophotography demonstration that involved tips and pointers about various genres of astrophotography that nearly spanned an hour and a half. We're pretty sure that there will be quite a bunch of good photographs coming up, given that the skies were near ideal. This was in turn followed up with an hour long "Ask an Astronomer" session where people came up with quirks and questions regarding Astronomy, which were duly answered by the BAS Volunteers to the best of their knowledge. While the fog clouds did make a spoilsport appearance, It was not before 3AM that everybody called it a day. Quite a night by any standards and amongst the best observing sessions ever. Coorg is probably going to be a location we'll frequent after this, thanks to the ease of accessibility as well as the stunning skies that it harbours.

It was a pretty late start on the next day, and understandably so. The late risers finally checked out of the hotel at about 11:30 for the return to Bangalore. On the way, we also visited the very pictuersque Kaveri Nisargadhama as well as the Golden Monastery of the Tibetan settlements at Coorg. Earlier, we had stopped for lunch at Madikeri. The homeward journey was marked with incessant talks and discussions on Astronomy, and event feedback in general. The latter half was marked with some social interaction amongst the participants as well as some good music with a bunch of people even managing to make a few kinesthetic moves to some of the foot tapping tunes. Before we knew it, it was nearly 10PM in the night. We retired briefly for dinner at Maddur. We hit Bangalore not before 11:45 and everyone was duly dropped home (or close). Naveen, I and Akarsh were the last to be off, and it was nearly 3:30 in the morning by when the last of us got home. The republic day (26-Jan, Monday) had already begun, and another event - The 10% solar eclipse was in the offing, to which a lot of people from the same bunch of participants would make it to.

Earlier, the trip itself begun late on friday night with not the most auspicious of beginnings. We ran into some critical final moment trouble on the logistics, viz Transport which resulted in a gross 2 Hour delay at most of the pickup points we had specified. We'd like to offer our gratitude to all the participants on the trip who patiently swalloed all these minor hiccups. It was not before 12AM that everybody was into the designated vehicle. The journey marked persistent marathons of "20 Questions" on Astronomy, with Akarsh, Amar, Shashank and I being the culprits thus responsible for keeping a lot of people up. Our driver Mahesh too chose the sensible option of sleeping it off for a while when we were just beyond Mysore. It was only at 6AM in the morning when we resumed our onward journey, and we ultimately managed to reach Bagamandala KSTDC guest house at about 9:30 for breakfast. The day also involved a trek to TalakAveri, in which a lot of participants took keen part. Before this we also Observed a 2 min silence in respect to our departed Joint Secy and friend Chandrashekar.

In all, the Star Party was a huge Success. We hope this is the first of many more just as successful ones to come this year of Astronomy. Our sincere word of thanks to all the BAS Volunteers - Amar, Vivek, Akarsh, Shashank, Deepak et al without whom the none of this would be possible. Naveen, not to mention, was instrumental and critical to this success in all respects. Quick word of thanks to the Driver and his sidekick (Mahesh) who too was our saviour in many ways. Last but not least, the participants whose keen enthusiasm was the lone element that mattered in the end.