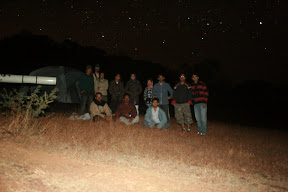 Second Star Party this season! While the cliched adjectives are but necessary, I'll reserve them for laters and mention the particulars first.

We started for Chikkmagalur late on friday night (20th), and it wasn't before 11PM that the last of the lot were safely into the TT that we had arranged. The journey was marked by occasional peeks at the 'Dusty' Carina and Centaurus regions andincessant vocal cacophony (aka AntAksharis and stuff) that also assured that our Driver was kept at his alert best. We thus reached the Datta Peetha junction, just beyond Attigundi very early in the morning, where we were to be guided to the place of accommodation by our hosts.

So, being on a desolate hill side, facing a deep valley with temperatures running teeth-chattering low (by our standards, mind you) isn't exactly a cool thing, Unless ofcourse you were to as fortunate as we were, to have crystal clear skies greeting us. The tail of Scorpius was just about drifting up the horizon whilst Spica and Arcturus had already risen high in the eastern sky. Saturn too was well up the horizon, sporting it's characteristic orange-yellow tinge. But the show-stealer was none other than C/2007 N3 Comet Lulin which was perspicaciously naked eye, and a brilliant sight through binoculars. Although it was inviting to get the scopes out, we decided against it, given that we only had about an hour left before it would be dawn.

And before the first light did dawn, we were to be greeted by another spectacle: The Saggitarius Milkway. The thick milky way haze, even that low on the horizon would by itself be quite a yardstick for the quality of skies that this place provided us. This however, was not to last very long, with the crescent moon following saggitarius in close proximity. The milky was nonetheless remained conpicuous, and provided excellent images for the photographers.

The Stay and the Climax:

We reached the camp, after a bumpy, twisty ride down the ghats. Sleep was assigned last priority, and we promptly set off on a trek right after we were done with the formalities of a breakfast. The trek spanned 6 hours in all, involved a 3 hour descent, a 1 hour cool-off session in the pleasant Bhadra waters and a seemingly suicidal jeep ride back up to the camp. This proved to be pleasantly strenous, and the tired souls were allowed too go into sleep mode for the next few hours (after a good lunch, mind you). Amar, Naveen and I hunted for a potential place to park the telescopes for observing. After being in a bit of a dilemma over 3 equally exotic spots, we chose what seemed to be the safest (and flattest) one. The tents were promptly planted here and we planned on a late night arrival.

The next thing on the agenda, was a session with the Class VII kids from Vidya Niketan school, Bangalore. We multi-tasked not-so-efficiently, running into issues with assembling the telescopes, thanks to some final moment mistakes. Ultimately, we found that only one of the three telescopes that we had brought would prove to be usable. In the meanwhile, Amar gave a quick round up of Constellations to the kids (despite overcast skies), and I shared a discussion session with the kids. Naveen had earlier, started off with an introduction about BAS as well as the why-how's of astronomy. Quick remark here, I personally found the kids extremely bright and well informed for their age. Curiously, their questions and fantasies were centered around things like Quasars, Pulsars, Black Holes, Space Travel and the like. While it was difficult to give them conceptual explanations on these enquiries, we could sense that they could intuitively relate to the analogies and examples we managed to give in these regards.

Soon after, we managed to grab Dinner. While the others prepared, to make the move to the observing spot we had chosen, We gathered a bunch of people on the telescope we had setup for the kids. The object aimed at, was Saturn and as usual it evoked startled reactions. The rings were apparrent, even in Pravin's low aperture telescope, and a more careful peek also revealed atleast 5 moons of Saturn, oriented mostly in the 10'O clock - 4'O clock plane. Titan was ofcourse, the most aparrent dot that everybody managed to notice instantly.

We finally migrated to the observing location, where the skies left us speechless. The star density in the Centaurus region especially being particularly mesmerizing. It wasn't before 11PM that we were all completely set up with the equipment. Orion and Canis Major sinking down the western horizon provided quite a few aesthetic images for the photography enthusiasts, as did Omega Centauri in the South East. Amar, through the night, did elaborate roundups of Constellations paying attention to everything from the intuitively bright to the mostly unambigous.

The highlight of the night again was to be none other than Comet C/2007 N3 Lulin. And much of this is owed to Amar's giant 20X100 Oberwerk Binoculars (Unfortunately without the mounting this time around). While they were heavy (5KGs?), and potentially capable of giving you a shoulder sprain just holding them up, or crushing your Orbit while holding them up lying down, The view of the Comet made the night for us. The comet, with it's condensed coma and the conspicous tail put together spanned half the field in the 3.5 Degree wide field, and was doubtlessly, the best sight of a comet since the days of 17/P Holmes last year. It proved to be rare luck for the attendees, that they got to see 2 comets in 2 months, after having sighted Comet Kushida at Coorg only last month.

Through the night, we were kept thoroughly entertained by the sky, discussions on Astronomy (or life in general :P), Photography and more. A discussion on 'Taking your astronomy forward' that Naveen and I took part in proved to a productive discussion, especially for the beginners and the second timers in the event.

Towards the morning, it was yet again the southern Milky way of Saggitarius and Scorpius to steal the show. While the moon had played spoilsport only the previous night, today there wasn't that hassle either. Saggitarius looked as glorious as ever, with the plethora of bright binocular objects that it provided us. Words fall short as far as this sight is concerned, so I'll keep the adjectives minimal. The photographs from the trip should convey most of the story.

Towards the morning, we dozed off in turns. The weather was pretty chilly, but the dew was minimal.

We skipped any more sleep than we could get at the observing venue, Got back to the camp, devoured our breakfast and got back into our bus all set to go back. The journey proved to be uneventful for the most part. We made swift progress, excepting for a brief stop at Chikkamagalur. We subsequently stopped at Belur, and went around the Temple, the one hour break proving to be nostalgic recollection of the HoysaLa era, architecture and past glory. We stopped for lunch at Channarayapatna. The arrival back to Bangalore was at about 10PM.

In all, the trip proved to be amongst the best star parties we've had. Looks like ChikkamagaLur will be one place we'll be visiting fairly regularly hereinafter. On a different note, the trip was proved to be good in the context that the final per-head price worked out lower than the initial threshold we had banked upon. At BAS, it is our philosophy to make these star parties appealing in more than just the astronomy-regard, while at the same time keeping them affordable to everybody. This trip, like always, yet again proved to be coherent with these principles. We hope to maintain the same level of keen enthusiasm and participation in the upcoming trips this year.